Well I’ve been busy reading. While searching eBay the other week I came across Wind Star: The Building of a Sailship by Joseph Novitski. Now I’ve read a few maritime books, my favourite being Devils on the Deep Blue Sea by Kristoffer A Garin. While I enjoy Maritime history books, there is just something about the business side which appeals to me. So that’s why I ordered this book, there are no reviews online about this book, so I wasn’t sure what to expect, even the eBay auction page only included the name, I did panic it wouldn’t be about Windstar Cruises. Thankfully it arrived a few days later and my worries were forgotten. 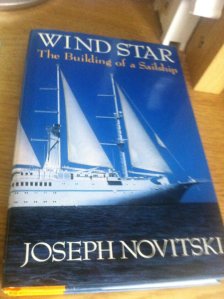 The book was published in 1987/8, and covers the launch of the idea in 1984 to its delivery, Unlike most ship histories this book is written by someone who was actually at the events and followed the development of the ‘windship’ themselves.

With Windstar Cruises being in the news recently, I thought a book showing the development of the Cruise Line and its first vessel would provide an interesting read.

As I opened the book the inside page was signed by the Captain & Chief Engineer, The signature doesn’t appear to be that of anyone in the book, but you maybe a reader will know? Get in contact if you do! Twitter/Facebook/Comment/Email! 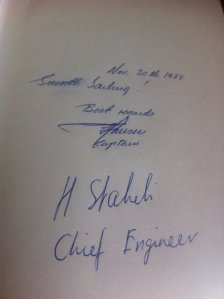 In the book we are introduced to all the personalities that made Windstar’s unique vessels what they are, from the man behind the project Karl Andren to the shipyard owner Gilbert Fournier and other characters whose personalities are expressed throughout the book. The book takes you on the journey of project development, the tendering process between the shipyards, the trouble with making masts, the excitement of the launch and sea trials, and the effort that was needed to create the renown interiors.

Ship construction is not usually a process we are made aware of, however increasingly cruise lines are using YouTube to show you the development of the ship, my parents followed the building and delivery of Oasis of the Seas before their cruise the following February. Now on the Day P&O announce their new ‘largest ever cruise ship for the UK market’ it would be nice if we could have a follow-up. *Hint Hint P&O!*

In fact I loved reading it, I read it on the train to work, I read it on my break in work, I read it instead of sleep between work! It has made me have the urge of go a Windstar cruise. I would recommend it to any ship lover;
At time of print there are currently two on Amazon.

The only failing of the book is it was published in 1988, A lot has changed, Windstar was taken over by Holland America, Who in turn was taken over by Carnival Corp, Then disposed to Ambassadors International and now Xanterra Parks & Resorts. Another sister ship was delivered, and Club Med 1 was purchased to become Wind Surf. It would be nice for an updated version to be released following the ships in the 23 years of service, and the changes in ownership.

My next book will be Selling the Sea: An Inside Look at the Cruise Industry by Bob Dickinson. No doubt another review for that will follow!