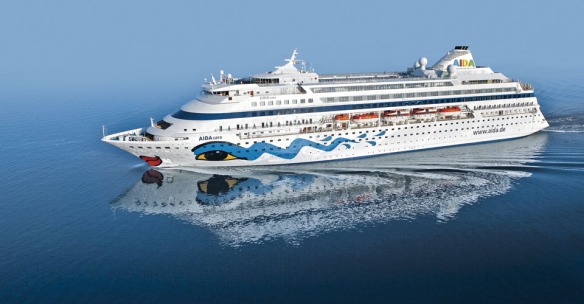 While researching for by last article on Royal Viking Line I found that at one point Norwegian Cruise Line had acquired AIDA before selling it back less than two years later. I don’t think any cruise ship has transformed cruising as much as AIDAcara.

Norwegian had recently restructured following its collapse as Kloster Cruises, a long and drawn out process which led to the closure of Royal Viking and Royal Cruise Line. However coming out of this restructuring the recapitalised business pursued an expansion program.

Aida is now the leading cruise line for the German market with a fleet of modern ships the company has single handily developed a cruise market in Germany. The company hasn’t always had this market leading position in fact when AIDA was launched the one ship fleet suffered losses.

Aida was operated by Arkona Touristik. The company was the privatised former East German State shipping company. Constructed in Turku and delivered in 1996 the ship took the concept of a laid back European club resort. The ship was to spend the summer in the Mediterranean and winter in the Caribbean.

Initial bookings where promising, but negative press publicity drove down demand and as such prices. The first two seasons failed to deliver a profit and the ship was sold to the recapitalised Norwegian Cruise Line in 1997. The ship’s loan was only for the first year, further financing could not be found so the ship had to be sold. Norwegian took immediate ownership of the ship and chartered it back to Arkona Touristik, with the option for Arkona to acquire the ship back within two years. Norwegian paid $178 million acquiring the almost new from Arkona.

At the time Norwegian Cruise Line looked forward to seeing the ship as an entry to the European market and perhaps building a better relationship the former owners. Norwegian, despite its restructuring, still maintained an uncompetitive fleet of mostly older vessels. A key opportunity would be to bring it’s vessels to Europe where the market was not as fiercely competative.

In September 1999, weeks away from the two year deadline, Arkona Touristik re-aquired the ship from NCL, paying $181million, a $3million increase over the sale price. To finance this a 51% stake in Arkona Touristik was acquired by British shipping company P&O. As part of P&O the company ordered an additional two sisters ships on an evolved design from what is now known as AIDAcara. On delivery of these ships P&O gained full control of the company, and AIDA went from one ship to a cruise line.

Changing prioritises at Norwegian meant that the company was seeking to strengthen its core brand, the sale freed up capital to fund the construction of Norwegian Sun. It is likely the deal was profitable for the company, as it was chartered to Arkona during the time it was owned by Norwegian. As a capital hungry industry AIDA would have needed significant sums of money to grow successfully and NCL probably realised that they did not have these resources.

In 2001 Royal Caribbean and P&O Princess announced they were to combine which would have become the world’s largest cruise group. The marriage was not to happen however the advances of Carnival Corporation on P&O Princess, which eventually succumbed to the dual listed structure of the current Carnival Corporation & PLC in 2003. One of the biggest winners out of this deal appears to be AIDA which has seen unparalleled fleet expansion. At 19 years of service an having spawned a large cruise line it will be interesting to see if there will be any changes for AIDAcara.

Now it is easy to think ‘What if?’, How different cruising would be if Norwegian had maintained ownership of AIDA, would AIDA be the leading cruise brand in Germany? Would Norwegian have a much bigger European presence? Would Carnival have so actively pursued P&O Princess?