The Magic Kingdom is having a great season on the high seas, with Disney Cruise Line posting excellent occupancy rates. The Orlando Sentinel has said that the new Disney Dream has been very popular with consumers showing an average occupancy of around 150%.

Occupancy is worked out on lower berths, so once children are added to a cabin, which Disney is a family cruise line, drastically increasing occupancy rates. While this is a good figure in itself it is also much higher than Carnival & Royal Caribbean achieve.

Cruise Radio (www.cruiseradio.net) recently pointed out that the Disney Dream is managing to charge very good rates, suggesting that you book early as the ship is quickly booking up. The current average nightly rate is $233, and the average balcony cabin is selling for 25% more than onboard Freedom of the Seas and 66% more than Carnival Dream, Surely Disney must be amazed with these results.

Before these vessels were launched the inside cabins, which have no windows or view, where boasted about by the magic portholes, which show a view of the sea outside with various Disney characters popping up every so often. This has allowed these cabins to achieve a rate 60% higher than those on Freedom of the Seas and 78% higher than those on Carnival Dream.

Disney Dream is the largest cruise ship ever built in Germany, built at Meyer Werft, as the first half of an order of two ships, the Dream & Fantasy are 40% larger than Disney’s two current ships Disney Wonder & Disney Magic. The line was launched in 1998 following the end of an agreement for Premier Cruise Lines to be Disney’s official cruise line.

The Disney Dream features an array of interesting features, with the AquaDuck, a water slide going around the top deck and it looks great.

While this ship seems set to become a great financial success for the line, we can only hope that this will lead to more Disney ships, with the fleet growing further when Disney Fantasy enters service next year. We think the Disney ships look great, with there two funnels and modern twist on a traditional design they are instantly recognisable. We do however need them operating out of Nice or Barcelona so we can spend four days in Paris followed by a week cruising the Med, every week. 😀

It has also been reported that the Dream has re-invigorated demand for the older Disney Dream & Wonder, With Disney Wonder having been moved to the West Coast of America.

While Disney is a family cruise line it also has a significant amount of adult only areas, allowing you to escape the kids for a while. While we havent yet been on a Disney Cruise we do think it is a must do, if Disney does cruising as well as it does theme parks is set to be a great time.

Check out http://disneycruise.disney.go.com/ or check out the http://www.disneycruiseblog.net/ for news on the Disney Cruise Ships.
Check out www.cruiseradio.net if you get a chance, Keeps you upto date on the cruise news.

Now if we were Royal Caribbean we would be building this new ship in the style of the Oasis class, the media and the public have fell in love with these ships. They love how amazing the split superstructure allows inside facing balconies and the feel of Central Park and the Boardwalk. So we believe that the split superstructure will be a feature, this is set to become a Royal Caribbean signature just like the Viking Crown lounge was and now the Royal Promanarde.

However due the constraints of shipbuilding at Meyer Werft we do believe that the cabins on these vessels will be rearranged, just like Viking River has done with the new Viking longships (check our previous article). The below picture shows how much space the ships have to fit through.

The codename ‘Project Sunshine’ is of interest as we think this means the vessels will, unlike the Oasis class, be suitable for use worldwide.  We’re expecting thats the ‘Central Park/Boardwalk’ area to have a glass roof, which can open and close, allowing the vessels greater flexibility. If you remember Royal Caribbean didnt stop in Southampton to show off the Oasis or Allure as the outside areas look rubish in the rain.

Meyer Werft and Royal Caribbean are expected to promote the vessels green credentials, this could mean LPG and other technologies currently envisioned in concept cruise ship EOSEAS (another previous blog). Like fleetmates Oasis and Allure the ship is expected to use solar energy.

We expect in general that the Project Sunshine ships will be slightly scaled down versions of the Oasis class, with the ability to be operated in both the Med and Caribbean. Other are however expecting the ship to be an evolved Celebrity Solstice-class ship, for which we have a picture for. (if you click on it, it gets bigger).

We hope it doesnt end up as a Solstice class ship, as I would love to see the features from Oasis and Allure in this new vessel, but until Royal Caribbean tells us we wont know!

Well the hype of Norwegian Cruise Line’s Project Breakaway appears to have hit a peak today, with CruiseCritic interviewing NCL CEO Kevin Sheehan about what might and might not be carried over from Norwegian Epic. You can find the link at the bottom of this post.

To create additional hype NCL was using the twitter hashtag #nclpb to keep people updated, but it is set be a busy night with #cruisechat occurring at the same time.

Before this announcement there has been alot of speculation about these vessels, which are to be smaller than Norwegian Epic, is that they will be built at Meyer Werft in Germany.

NCL is returning to Meyer Werft having built Epic in STX France, Meyer Werft has a large amount of new build orders from a variety of lines, including Disney, NCL, Royal Caribbean and Celebrity.  The last vessel Meyer Werft built for NCL was the Norwegian Gem. They will be the largest cruise ship ever built in Germany, taking the title away from Disney’s Disney Dream.

The Project Breakaway vessels will have approximately 4,000 passenger berths. At 143,500 gt these vessel will be large ships indeed, significantly bigger than the other ships in the NCL fleet (other than EPIC). In his interview with CruiseCritic NCL CEO Kevin Sheehan commented how this was appearing to be a standard size with Royal Caribbean’s Project Sunshine being of this size.

This announcement showed us some of the staterooms for the vessels, which are being described as a Boutique Hotel at Sea, the ship is expected to have over 1000 Balcony Staterooms. It has also been confirmed that the toilets that have been so heavily criticized on Epic will not be making it onto the new vessels, but from the pictures it would appear that ‘new-wave’ cabin design will be making a reappearance (we believe), thought more refined. We really do like them and think they look very contemporary. 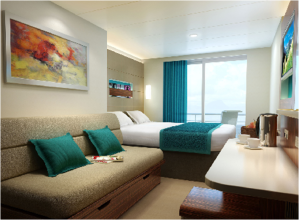